Why did Intel kill off their modem program?

Not why you think they did or even when

Minutes after the Qualcomm/Apple settlement yesterday Intel announced they were shelving 5G modem development. SemiAccurate has been following this story for months, it isn’t a new development or change, it was a done deal in 2018.

This article was originally going to be titled, “Intel trying to sell off a division” but they beat us to the punch. There is a lot more to the story than was released in their terse press statement. Lets take a look at the history of Intel in modems, how well they have fared, and why they pulled the plug now.

There is no way to sugar coat Intel’s modem story, it has been a flaming disaster from the start. Intel bought no less than four complete cellular modem units or hired their teams, Infineon, Via Telecom, and Motorola are the big additions in their quest to make things work. One after another pieces were added to plug the holes in the dam but there was no chance of it succeeding. From the beginning it was obvious to any onlooker that the Intel cellular modem program was untenable.

Lets start at the beginning with the venerable Motorola Razr I, a great 3G phone that the author still has and thinks highly of. It was supposed to be a 4G phone but Intel was 18+ months late delivering 4G technology. By the time 4G chips came out the deal was dead. Motorola had been sold twice, and nothing more came of it. Why do we bring this up? Money.

The deal with Motorola was for $350M or so. Buying an entrance into the high end of the phone market with a halo product was a smart plan on Intel’s part. Sadly actual performance and follow-through with 4G silicon was necessary too. Intel paid Motorola about 1/3 of a billion dollars to wedge their way into that market, then failed to deliver the parts needed for the device. Motorola had to launch their high end halo device in 3G markets with Intel SoCs and used ARM based LTE chips for the rest of the world. Sources say about 40K phones were sold throughout the lifetime of this multi-year project so each phone shipped with about $100K of slush funds wrapped around it. I have the phone, I would have preferred a house.

Throw in another $125M or so to grease the skids for Lenovo’s Intel based phone program and a few more lesser ‘deals’ and you are at over half a billion in slush funds alone. What came of this? Other than some pretty awful products it was OEM loyalty measured in minutes as soon as the money tap dried up. No one produced Intel based phones because, well, they were abjectly awful on the modem front. They were pretty marginal on the CPU side at first but that was polished up to a state of adequacy that the modems never achieved.

From there the tactics shifted to investing in chip companies. SemiAccurate exclusively told you about Rockchip and Spreadtrum was soon to follow. This was all tied up in the moribund Sophia program about which Stacy Rasgon ended up coining the term Contra-Revenue. Short story, it was a disaster that SemiAccurate called long before any other source. It too never saw the light of day. Once again SemiAccurate exclusively broke the news of it’s death.

There were other train wrecks along the way but the core problem was simple, Intel promised OEMs and device makers a certain set of specs for their upcoming products. The device makers took this on faith and built products based on that promise. Intel failed to deliver on time or on spec, usually both, and the device ended up being out of place or out of price in the market. None of them were successful.

This sad state of affairs is the key to the knifing of Intel’s modem program, the company quite literally never delivered a modem that worked right. The most glaring example of this was the iPhone 7 which had both Intel and Qualcomm variants. On paper it was a 1Gb LTE device but Apple only delivered a 600Mbps iPhone.

That same 600Mbps Qualcomm modem in the iPhone ran at 1Gbps in Android devices. The Intel modem ran at 600Mbps max and there were no other customers to make a comparison to. Apple crippled their Qualcomm parts to match the delivered Intel specs. Worse yet those Intel parts were only 600Mbps on paper, in practice they had 30% lower throughput. On top of this the Intel modems consumed vastly more energy to do their slower work than Qualcomm, a trend that SemiAccurate has personally measured in the labs across multiple generations of Intel modems but is not at liberty to disclose exact figures on, sorry.

This is significant for several reasons. First, phones operate on batteries and 30% lower throughput at 30% higher energy use means the Intel modem was about half as efficient as the Qualcomm one. Not only do customers with Intel iPhones get a second rate user experience, they get worse battery life as well. And then there are the carriers whose product is effectively finite air time on a specific frequency.

If a phone is 30% slower due to retries and packet failures it means it ties up 30% more of that time and costs carriers much more to support. They are keenly aware of this and hate Intel modems. If you think about this in monetary terms, if iPhones are ~30% of the market and tie up 30% more resources than an equivalent Qualcomm device, that means the carriers with Intel iPhones, T-Mobile and AT&T, just lost ~10% of their core product to inefficiency. Competitive disadvantages like this are painful to say the least.

Apple knew how bad the Intel modems were but they used them anyway. Apple was keen to cut Qualcomm down and reduce them to a commodity supplier. They did everything they could to help Intel’s modem business succeed even at the cost of their own device quality. Intel ‘selling’ Apple modems for a reputed $-10 per unit probably didn’t hurt much either but the long game was what Apple was playing. It failed spectacularly.

Yup, this one is real, please believe us!

Getting back to 5G it was a disaster for Intel. The company claimed to have 5G silicon in 2017, and they showed of a faked ‘chip’ to prove it. It wasn’t even a convincing Photoshop job but go back and look at the journalists and analysts who bought company line are how they reported on it. SemiAccurate was the lone voice saying it was fake. Intel never showed silicon and ended up canceling the XMM 8060 before it ever saw the light of day. Why? SemiAccurate sources told us that Apple didn’t want it because, “It didn’t work”.

This abject failure was obviously messaged as a triumph, the successor part called XMM 8160 was ‘ahead of schedule’, doing really well, and going to ship in late 2019. SemiAccurate laughed at the audacity of this line of BS and then we saw the kicker, Intel Photoshopped the same fake chip that they claimed was the XMM 8060 into the new XMM 8160. 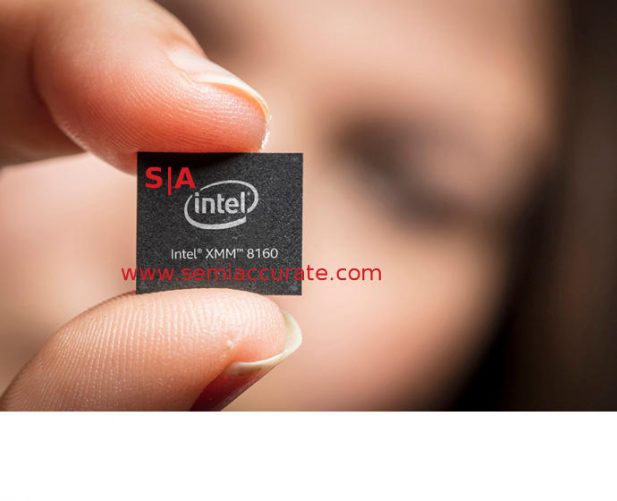 This one is realish too, would we make things up?

The family lineage was strong here, our sources say this modem didn’t actually work either and Apple was scared silly about the prospect of putting it in an iPhone. Intel was adamant that it was on time for late 2019, it worked, and how to put this delicately, that it was real. To the best of SemiAccurate’s knowledge functional silicon was never shown publicly or demoed. This was a product line so good that Apple crawled back to Qualcomm and settled for billions of dollars.

Minutes later Intel announced that they were pulling the plug on smartphone modems. People wondered about the speed and reactionary nature of this knifing but it was in fact it had been in the works for months. SemiAccurate first became aware of the death of the modem division in Q4/2018 but it had been in process for quite a while before that point. Some are claiming this was the work of the new CEO Bob Swan but it was a done deal long before BK was shown the door.

Note: The following is for professional and student level subscribers.